Throughout our travels, nearly every person we met who’d been to Istanbul proclaimed it as his or her favourite city. With the benchmark set so high, we made our way from Bulgaria to Istanbul on Metro bus-lines not knowing quite what to expect. Coming into the outskirts of the city we realised what a huge metropolis Istanbul is, spanning two continents and stretching further than the eye can see. The skyline is beautiful and evocative, with minarets and sparkling coast vying for your attention.

Istanbul’s public transport system is impressively first class and efficient. Our train-tram ride from the bus station into central Sultanahmet (old town) was easy, cheap and much faster than taxi or bus through the crowded motorways.

Arriving at our hotel we dumped our packs and wandered out into the fray to find dinner. Sultanahmet’s dusk horizon is a sight to behold, featuring the Blue Mosque and the Hagia Sophia. Shopkeepers were friendly, inviting us to try their wares, and barbers waved Josh into their salons for a much-needed close shave (which he didn’t care to take up).

We had a few days to ourselves before joining a tour that would take us along the Aegean coast to many of the key sites of the ancient world.

Day 1
Sultanahmet Square incorporates the site of the former Roman Hippodrome, Blue Mosque, and Hagia Sofya. It is usually abuzz with locals, tourists, and enterprising souvenir sellers. We took in the surviving relics of the ancients – Constantine’s Column, the Walled Obelisk, Serpentine Column, and Tuthmosis III’s Egyptian Obelisk – before making our way across the park to the Basilica Cistern.

The Basilica Cistern is an incredible feat of engineering, built for the Emperor Justinian in AD 532 in an upgrade of the existing Cistern. A voluminous and atmospheric chamber filled with columns, the Cistern held a capacity of some 30,000 litres of water to supply Constantinople’s Great Palace and other surrounding buildings. A walk-way and lighting have been added to enable visitors to explore the expansive space and capture moody photos of the columns reflecting off the remaining water supply – now home to large family of fish. 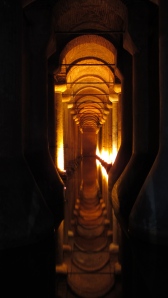 The Archaeological Museum is well worth a visit for its treasures from Roman and Ottoman Empire days, we particularly enjoyed the sarcophagi and statuary. After a very late lunch we moseyed across the Galata Bridge and wended our way up the steep cobbled laneways to the Galata Tower. The Tower provides a magnificent 360° view of Istanbul. Wandering back to our pensione we stopped at a local bakery for some dinner snacks and set ourselves up on the roof to enjoy the sunset.

Day 2
We spent our entire day exploring the Topkapi Palace. The Palace is home to an expansive arrangement of courtyards, vibrantly tiled architecture, and gardens with stunning views across the city and its watery connections. The hot tip is to buy your tickets online in order to avoid queues at the ticket office – there can be any number of cruise ships disembark for a day in Istanbul and the passengers descend on the Topkapi in droves. We’re frequently amazed by the behaviour of other people, yet were stunned to witness a couple photographing their 3 or 4 year old daughter in sultry poses in the Palace Harem. 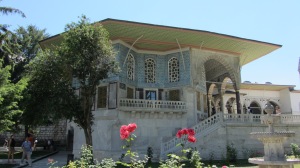 Leaving the Palace we moseyed down to the Eminönü waterfront to pick up a Sunset cruise on the Bosphoros.

evening light on the Bosphoros

Day 3
As we were joining our tour group this evening, we had a lazy morning before changing hotels. The fancy new hotel gave us a charming welcome: we checked in at 11am, where the concierge fairly grunted at us, shoved a disclaimer in front of Josh to sign then snatched it away as he did so. A key was thrown at us with no less aplomb. Later on we decided to cool off in one of the hotel’s two prominently advertised pools. Firstly, the rooftop bar and pool – no bigger than a jacuzzi – populated by many sunbathers. Off we trotted to the downstairs gymnasium pool. (Seriously – who works out on holiday?) The pool was kidney-shaped and required two strokes to lap, if that. The attendant asked if we had swimming caps (of course we did… not), a requirement of pool use. They didn’t seem to be bothered by hairy backs and torsos, just my short blonde head-hair.

We laughed our way out of there and spent the afternoon exploring the wonderful sights, smells and colours of the Spice Bazaar and Grand Bazaar.

deliciousness at the Spice Bazaar, Istanbul

Day 4
With our new companions in tow, a pair of Aussie brothers, we returned to Topkapi Palace to see the bejeweled gold wonders of the Palace Treasury. In the afternoon we took in the magnificent architecture of the Hagia Sofya, Sultan Ahmet’s tomb, and Blue Mosque. 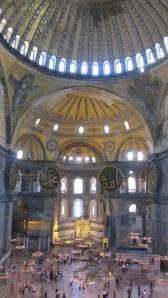 A local eatery turned out a delicious dinner of stuffed vegetables, pide, kofta, and Manti (Turkish ‘ravioli’ in a garlicky-yoghurt sauce) followed by a chilled rice custard, which we walked off with a wander back through the Sultanahmet Square to see the monuments lit up for the last time.

One thought on “Istanbul”