Arrived safe and well in Paris on Sunday, but boy did we underestimate the power of the jet-lag!  The first two days we (well, Josh reckons it was just me) walked around like Aussie zombies then bombed out very early.

Day 1 : visited Notre Dame – what a cathedral! Paris has some sensational stained glass. We were lucky enough to catch the lunchtime service. We then queued for about an hour to climb the ND tower. My legs still haven’t recovered from the approx. 5 flights of circular stone stairs – but what a view! From the first level balcony we could see right across the north-east-west of Paris – contextualising the Eiffel tower for us.  Another 4 flights of circular stone stairs (seriously folks, our thighs were trembling afterward) took us to an incredible view across all Paris, plus the ND bell tower. Then we had to climb down… 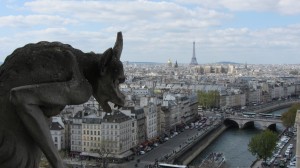 Afterward we paid a visit to the Pompidou Centre for a strong dose of 20th Century and contemporary art, and our first dose of museum fatigue. Made it back to our BnB which is right near a Metro and feels like it’s the centre of Paris.

Walked under the Eiffel Tower – it is truly larger than life, though it only has one lift working at the moment so the queue is massive.

Day 2: we woke with aching legs and thought we’d push them a bit further by taking on Invalides – the national war museum, a former hospital built to house returned, invalid servicemen c.16/1700s. Napoleon expanded it to include a national war museum, and it was later expanded again to house the tomb of Napoleon and other prestigious military figures. 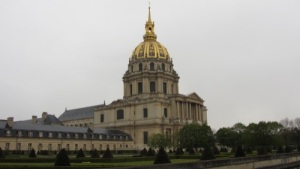 Paris is much colder than expected – 10 degrees and very rainy. On the way home we discovered Rue St Claire, a local street market with fromagerie, charcuterie, boucherie, flower shops, and the much looked forward to boulangerie where Josh had his first strawberry macaron on French soil. It lasted two bites.

Day 3: visited the Musee Rodin – this is Rodin’s lovely C19th estate home with garden that has been turned into a museum and sculpture garden. Among an impressive range of sculptures saw Le Penseur and Hell’s Gate. I hadn’t studied Rodin so didn’t realise that Hell’s Gate includes references to all his sculptures. We then descended upon the Louvre. Wow! I had no idea it was as extensive as it is (must have been hiding under a rock during art classes). We found the obligatory Mona Lisa and other key works, and so many more exciting things to boot – such as the medieval wall foundations for the fortress which was how the Louvre began its life. Thus commenced an obsession with stone walls… After 8 hours in the Louvre we still only managed to see a fraction of it. Unfortunately when we left the Louvre it was bucketing down, we walked until our jeans were soaked through (yay waterproof shoes and jackets) and finally found a train station.

Day 4: decided to take it a little easier and visited a market at Bastille. Made a few purchases for picnic style lunch and dinners, and the most pungent garlic. Looking forward to cooking that one on Saturday. Moseyed down to the Pantheon, which is a crypt for famous French intelligensia (such as Rousseau, Marie & Pierre Curie, Voltaire, etc) but which has a potted history as a building originally planned as a Church. Fabulous architecture and Foucault’s pendulum – a device used to ‘prove’ that the earth rotates once in 24 hours (Josh can explain that one later if required!). Then we wandered over to the Museum of Medieval History (Musee de Cluny). It started life as Roman baths, then a medieval Church, and now a world-class museum. It is encompassed by a stone wall.

Tonight we’re heading off to see the Moulin Rouge and Paris at night!

Our Frenglish is getting us by so far, so feeling pretty happy about that (though not sure how we’ll go as we get deeper into Europe.

One thought on “Paris 1”