We began our Romanian adventure in Bucharest following a 19 hour train journey from Bratislava, Slovakia, with a change at Budapest. The ticket buying experience was a whole adventure in itself! Tickets were 100 Euro each for 2nd class and 140 Euro each for 1st class. We were told that 1st class meant you had a reserved seat; and there was no sleeper carriage. We requested to travel on a specific train, but were given a generic ticket for use any time on or after the date of the train we wanted. All was fine in Slovakia.

Changing trains at Budapest was interesting to say the least. We found the connecting train and thought we’d hit travel jackpot by claiming an empty compartment (Harry Potter style), until the conductor came along and said (in German) ‘Bucharest 5 carriages down.’ Off we trotted with all our gear and found ourselves in modern comfort. An open carriage with 4-seat berths set around a bench. Another conductor came along and it turned out we were required to have a seat reservation (which we thought our 100 Euro had purchased). For an on the spot fee of approximately 1 Euro we were sorted. The lights were on all night. Our eye masks would have been useful if not for the well-slept fellow two berths behind us who promptly passed out and snored so loudly that it gave another traveller the giggles.

We crossed the Hungarian/Romanian border In the wee hours of the night. Our passports were fine, but one poor fellow was escorted from our carriage. As we pulled out of the train station a few souls were left stranded in the orange light of a Soviet-era train station.

Come dawn, my first impression of Romania was one of great natural beauty. Unable to sleep, I witnessed a glorious sunrise – the horizon streaked rosy pink and orange, gradually fading into a blue sky spotted with fluffy white cloud. We passed vast forests, lowland with a backdrop of misty forest, meandering rivers, and much manually-cultivated land. Villages had the kind of picturesqueness that belies great poverty. One village looked positively medieval – small houses with whitish facades and red roofs. The walls of some were dilapidated and their construction laid bare – straw bale and mud brick. Some were tiny one or two room huts, others looked like single storey with an attic and the loft window set quaintly into the roof. I wondered how modern conveniences of electricity and running water are retrofit into such homes? Heating even? Most houses had well cared for gardens filled with veggie patches.

Looking out the window of the train I naively began to feel that Romania offered the experience I’d been longing for – the ‘authentic’ Eastern European experience. Something raw, different to the appearance of the modern – or rather, modernising – world of Western Europe, where the histories are so completely intertwined they narrate one long tale of lust for power, occupation, rule, transference of power to other powers, more occupation… to the point where architectures of cities resemble each other as much as local building materials allow.

Disembarking at Bucharest, we discovered the train actually had 3 sleeper carriages. Perhaps we’d have done better to book the leg from Bratislava to Budapest, then purchased tickets for the next leg from Budapest station.

We stayed four days in Bucharest. The Lonely Planet was quite dismissive of Bucharest as a city, suggesting that a single day would suffice to see all it has to offer. We could easily have packed a few more days in.

We managed to fit into our time quite a lot of site-seeing:
– The Museum includes the Roman lapidarium; an amazing gold objects collection from pre-history through to middle ages; a Roman column (Trajan’s Column) depicting Rome’s conquering of the local Dacian kingdom; and an extensive philately (stamp) collection; 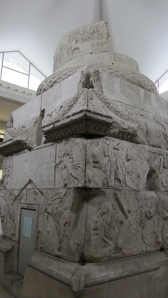 – The former Royal Palace, now the National Art Gallery;
– A concert at the Athenaeum Philharmonic Hall, one of the most impressive and unusual music halls we’ve ever been in; 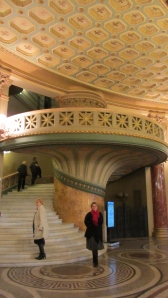 – Churches
– the Free walking tour
– Palace of Parliament tour. It is essential to call a day ahead to make a reservation for your preferred tour time. The Palace of Parliament is one of former president Ceausescu”s greatest legacies. It is also a white elephant. A certain feat of building, the Palace of Parliament is the largest single building administrative building in the world. It stands a whopping 89 meters above ground and extends some 98 meters below – including its nuclear bunkers. Ceausescu was ousted before the conclusion of building, and the building has not been used for parliamentary purposes at all since completion. Famously, Michael Jackson addressed his fans from the building’s primary balcony, ‘Hello Budapest…’ Suffice to say, they were not impressed. 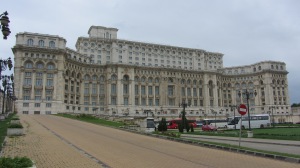 Food
On night one we ate at La Mama’s, a restaurant that was very cheap and had great food and service. It was so good, in fact, that we returned the next night after seeing the philharmonic concert (it was just next door). Big mistake. Service was so slow that we were literally about to leave after sitting for 30 minutes without even a drink order being taken. The food, when it finally arrived, was warm at the edges and stone cold in the centre. When we complained (very mildly I might add, compared to the way we’ve witnessed French and German travellers complain) the waiter simply told us that our moussaka was meant to be cold. We placated ourselves by not leaving the – obligatory – 10% tip.

Dinner on night 3 was much better. We found ourselves in a flash storm and bolted into the nearest restaurant, which had 2 other customers. We got by in a quasi-sign language with the waiter and thought we’d ordered pretty well. I thought I’d managed to order a chicken breast in citron sauce with scalloped potatoes. Much to Josh’s entertainment my chicken came out with a sauce of -horror upon horrors – citron and mushrooms (being an anti-fungus sort, I would neither order nor eat said mushrooms) and potato with bacon. Mushrooms scraped to the side I actually had a delicious meal. We then went through the process of ordering dessert – traditional donuts filled with a sweet marscapone and berry sauce. All in all not a bad evening.

We enjoyed Bucharest, though for us once was enough. The northern and central areas of Romania have rich and interesting experiences in themselves and are well worth exploring. More to come in the next blog post ‘Hiking Romania’.

One thought on “Romania – part 1: Bucharest”